What Is Wrong With The Current Education Situation? 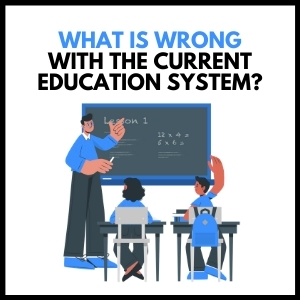 There is something seriously wrong with the current education system. It’s hard to put a finger on it, but it’s fair to say that the schools and colleges of today do not prepare students for jobs in the modern day industrial economy.

Too many recent college graduates end up joining jobs that they have no aptitude for. Employers talk about a “skills gap” and prefer to hire people who have had at least a couple of years of work experience. They just don’t trust the modern day education system to provide them with job ready candidates.

Industry veterans such as P Gurnani, CEO & MD of Tech Mahindra, a leading IT company, have observed that 94 percent of engineering graduates are not fit for hiring. "The top 10 IT companies take only 6% of the engineering graduates. What happens to the remaining 94%?" Mr. Gurnani said in an interview with the Economic Times.

Another report found that 90 percent of commerce graduates could not land a job soon after graduating.

This raises questions about the present education system. Something is wrong with it, everyone knows that, but nobody has done anything about.

Here’s what we think…

#1: A lot of the lessons/facts taught in colleges and universities today are already obsolete or can be obsolete in a few years.

#2: The present day education system is more about rote learning, memorizing than about experimentation or development of real-world skills.

#3: It’s not enough to get a degree from a top college or university. A degree does not equip you for a job in the industry. You must develop industry specific skill sets to be considered employable.

#4: There is too much emphasis on written tests and exams. The entire education system is based on that. There are students who do very well at tests and exams but are found to be woefully inadequate at a job in a real world situation. It’s like a star student at a flying school who does very well when working with flight simulation software, but crashes the plane the first time he flies one by himself.

#5: There is too much politicization of education. We see that in the United States, and we see that in India. Our universities have become fertile playing grounds for various political and ideological battles rather than places that equip you for a job in the industry.

What could be the solution?

Ultimately, it’s all about skills – marketable skills. Skills that are needed by the industry. Make no mistake - there are plenty of jobs available out there, unemployment is not really a problem. Not in India, not in the United States, not anywhere in the world.

The real issue is that while colleges and universities across the world do not really train students well or equip with the right skills. That is not even a focus for them. So if you’re serious about landing a good job as soon as possible, it is up to you to pick up the skill sets that are in demand yourself.

You can do that by joining online learning platforms such as SKILLFIN LEARNING, which is specifically targeted at those looking for jobs in the Banking and Financial services sector.

Have a look at the different online courses at SKILLFIN Learning. They are conducted by industry professionals with years of experience in the banking, financial and consulting industry. The courses are 100% market oriented and based on the specific industry requirements. You will pick up critical skills that you didn’t learn in college.