The Ultimate Guide to Finance Modeling and Valuation Skills 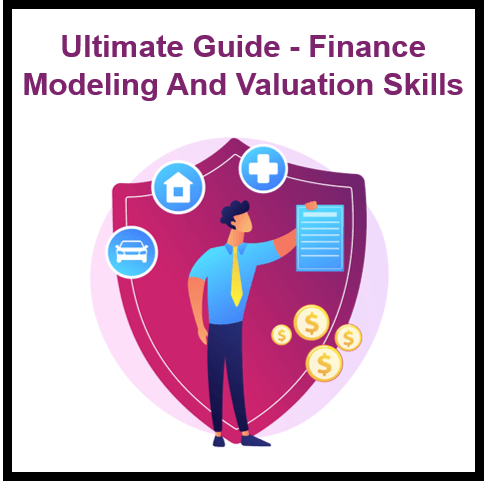 Finance modeling and valuation skills are some of the more sought-after and lucrative skills in the market. Whether you're just starting out as an analyst or you're looking to take your finance career to the next level, this guide will tell you everything you need to know about financial modeling and valuation.

The guide will cover:

What is finance modeling?

A financial model is a multi-dimensional spreadsheet that helps decision makers with critical questions. Whether it's forecasting, sensitivity analysis, or scenario analysis, these models are made to help you plan for the future and make better decisions today.

Finance models can be classified as forecast, sensitivity, or scenario analysis models.

-Forecast models are used to predict what will happen to a business in the future. They include budgets and cash flow projections.

-Sensitivity models help evaluate how changes in variables will affect a company's performance. A good example of this is a break-even analysis that determines the number of units necessary for a product or service to break even on costs and expenses.

-Scenario analysis deals with uncertainty by using various assumptions to monitor the impact of different outcomes on an organization's performance. This type of model may be used to assess the effect of different exchange rates, commodity prices, tax rates, and competitor actions on revenue streams from global markets.

A financial model, also known as a "projection model" or "financial statement forecast," is a computerized estimation of how a company will grow and make money. It typically estimates future cash flows, often at the level of individual customers.

In this guide, we'll cover how to use Excel for finance modelling. In this post, we'll teach you how to set up your Excel spreadsheet for modeling and show you the different types of models that can be created using Excel.

Valuation skills are needed when determining the price of an asset.

The most common assets used for valuation are shares, bonds, real estate, and startups. The process includes determining if the worth is worth more than what it costs to get the asset or if it's worth less because of sunken costs.

Private firms are not traded on an open market so their valuation is subjective and based on formulas. Publicly traded firms' assets are priced through the market so there's a benchmark for pricing these assets. Privately-held companies require a detailed analysis to determine how much they're worth.

So what does this mean? It means that the more information you have about an asset determines its value which makes valuation skills critical in finance modeling.

The value of a company

The value of a company is determined by what someone is willing to pay for it.

The value of a company can be calculated by estimating the present value of future cash flows.

Future cash flow can be estimated by calculating revenues, subtracting expenses and adding back in any depreciation and amortization to look at the net income.

There are many types of valuation models. The type you use will depend on what you're valuing and your desired output.

However, there are some basics that should be followed.

You should make sure to do both a pre-tax (net) and after-tax (gross) valuation for the same asset. That way, you can compare the values without bias.

You should also make sure to list the assumptions behind the numbers in your model so it's clear how they were obtained.

This is especially important if one of your assumptions is that something will happen in the future - it's good practice to link this assumption with data on how likely that event is happening.

Bonds are securities that can be bought and sold, and they pay a set rate of interest, called the coupon rate. The coupon rate is specified when the bond is issued, but it can change over time.

The market value of shares and bonds

The market value of a share is also known as the intrinsic value.

When an investor buys the share, it's implied that they think the share is currently undervalued and has more potential than other shares on the market. If this is true, then the intrinsic value should be greater than $0 per share.

The intrinsic value of a bond is also known as the redemption or cash flow value. This represents what someone would receive if they were to purchase a bond from you now for future payments.

If you're trying to figure out how much a particular asset is worth, one way to do so is by looking at its market value.

After reading this section, you will understand how to assess the value of real estate.

There are two approaches to valuing a property:

Bottom-up valuation which assesses the intrinsic value of the property by looking at individual components, including location, size, condition, and capitalization rate.

Startup valuations are usually based on the price per share, which is calculated by dividing the company's equity value by the number of shares outstanding.

At the beginning of a startup, there are two types of shares: pre-money and post-money. Pre-money shares represent the amount of equity in the business before it begins operations. Post-money equity is determined after money has been raised for starting up.

Valuing startups relies on many assumptions about future revenue growth, milestones, risk tolerance, etc. The valuation also depends on how much money has been raised to date and how much time has passed since funding was received.

Generally speaking, startups with high growth potential are valued higher than companies with slower growth prospects because investors have more faith that they will see returns over time.