The Power of Total Shareholder Return in Business Growth 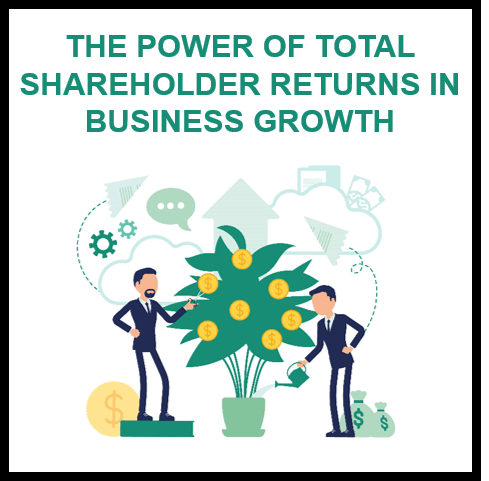 Total shareholder return (TSR) is considered as a measure of a business’s financial performance, referring the complete amount that an investor makes from an investment—especially, equities or shares of stock.

What is Total Shareholder Return?

Most TSR studies focus on companies with market capitalizations greater than $2 billion, suggesting there is a selection bias in their findings. Based on the large-cap stock universe, as analyzed by the Wall Street Journal, companies with high TSR have generally performed well in the last decade—with the S&P 500 and Russell 1000 ranking in the top half of TSR players.

TSR data isn't perfect, of course. But it is a useful tool to study the best performing companies and how they have gained their competitive edge. How does Total Shareholder Return impact investment performance? The fact that TSR is a measure of past performance suggests that it is not necessarily indicative of future returns.

Why does TSR matter for business growth?

Uncertainty. In the words of George Washington Carver, "An uncertainty is a bad thing to have about one's life." Uncertainty leads to decision-making based on innuendos rather than facts. If everyone buys the same program, you must decide whether to buy, based on stereotypes rather than data.

How does TSR impact an investment portfolio?

TSR directly impacts an investment's long-term value. In some cases, it determines an investment's overall returns. TSR allows an investor to measure and compare the performance of a stock or its portfolio—as measured by the price to the share value—as it relates to the broader market.

Advantages and Disadvantages of TSR

The major advantage of TSR is that it's an easy to calculate and assess metric for evaluating and comparing different investments. The drawback is that the rate of return is one-dimensional. By comparing returns on the same investment, investors can obtain a rough approximation of relative returns between investments. However, it's not a holistic measure of performance and it doesn't take into account how risk and volatility are involved in each investment's performance. Advantages of Long-term Shares Because of TSR's fixed-return, long-term nature, it can be a useful tool in evaluating an investment's prospects, especially in industries where long-term performance is typically strong. On the other hand, TSR is only as good as the investments it considers.

How TSR can affect company’s profile

TSR does not calculate the exact size of any particular investment or its corresponding return. For the very same reason, TSR might as well favor investments that include high rates of return preferably when the dollar amount of the investment return is small.

The BlackRock Index: A Solution to the weighted average price of the 100 largest non-financial companies listed on the NYSE. Why Is TSR Important for Retirees? TSR is an important part of a retiree's overall financial plan, as it provides the basis for deciding how much of their portfolio they want to keep in equities and how much in fixed income.

Funds with the highest TSR, at both the end of one and the beginning of the next year, tend to outperform market indices and other funds. TSR vs. Total Return: Can Fidelity be Used to Predict the Future? Fidelity has a successful track record of delivering the top three performers and bottom three performers every year for the past 15 years.

Its research shows that the firms that are out of the money on the TSR scorecard end up outperforming the market overall. TSR vs. Price Returns: Does it Still Matter? Past TSR performance has not predictive power over future TSR, but past price returns may show the value of a business's underlying assets. TSR vs.

In the case of TSR, the share price appreciation is tied to the sum of the dividend payments and the stock price appreciation. If the investor/owner of the stock holds the stock for the period indicated above, he/she will be netting more money than the initial purchase price, so his/her TSR will be higher than the company's TSR. For companies with depressed share prices, this could represent a buying opportunity, and the trend can result in higher revenues and earnings growth.

TSR usually has a positive correlation with earnings per share. A company with high TSR will be evaluated more favorably than a company with low TSR. This is why it is important for investors to be aware of total shareholder return and to take into consideration how it affects their portfolios. In general, higher TSR is desirable because it signals that a company has a stronger competitive position and a higher chance of increasing the prices of its shares.

When TSR increases, this usually also means that the company's financials will show stronger results, including higher profit margins. The return is expected to generate more value for shareholders, i.e. the aggregate increase in value that a company creates will be bigger the higher the TSR.

Total shareholder return can also impact the amount of equity compensation that a worker can earn at an organization. The more total shareholder return a company has earned, the more equity compensation can be distributed to workers. For example, if the company's TSR is greater than 10 percent, then employees can expect to receive shares in excess of 3 percent of the company's total market value, based on data from a Gallup study.

These extra shares can make up a significant portion of the total compensation that an employee can receive if he or she reaches certain performance milestones. Potential for market disruption If companies are able to distribute excess equity to workers that can be accessed in times of economic difficulty, then the market value of those shares will drop.

TTSR also does not take into account gains, which are often subject to corporate taxation. If you know how TTSR and TSR differ from each other, be sure to also understand how this calculation is consistent with both a fundamental and an accounting perspective.

Calculating Shareholder Returns Calculating share price and dividend growth rates for an individual stock is fairly straightforward, but there are a number of factors to take into account when calculating share price growth for an entire industry. To calculate industry-wide TSR, the sum of the following three components must be divided by the sum of the individual company TSR: 3-Year TSR 5-Year TSR 10-Year TSR 3-Year TSR measures the return of the company's stock over a specified period.

Total shareholder return (TSR) is a way to determine how much your investment has made for you—how much additional money your capital has earned in a specific time period. It takes into account both appreciation in a stock's shares and the dividends paid on those shares. It has its limitations—what financial metric does not?—but overall, it provides a more complete sense of your return on a stock than simply gaging the gain in the stock price.

How TSR Affects Your Investments

The metric of total shareholder return is one that has been actively discussed with regards to why shares of Starbucks Corporation (NASDAQ: SBUX) have performed so strongly in recent years, despite their low current share price. This is likely due to the company's robust sales in the United States and the huge cash cow that is their business in China.

The stock's growth in U.S. sales over the past few years has been so substantial that Starbucks has been able to increase their shareholder returns far beyond their peers. That's certainly been true for us as investors. As a reminder, we've been SBUX longs for a while now, and we've gained well over two-thirds of our capital on the stock since we first started covering it in mid-2012.

How to Get the Best Results from TSR

Using TSR to figure out how your stocks are performing is not as simple as comparing the share price of a given stock to the trading price of the underlying stock (for example, if Apple is trading for $188, its TSR is 2.5%). This is because there is significant uncertainty with TSR. Your best bet is to use the stock's TSR as a rough guide as to how well the stock has performed.

The primary risk factor is timing. Because TSR values are calculated as a sum of all dividends and stock price appreciation, if you buy when the stock is trading at its high, and it never reaches that high again, you'll actually lose money. Conversely, if you buy right before the stock falls to its low and it never reaches that low again, you'll end up with a positive return, even if the stock never recovers. Therefore, do your homework before you buy.

Take the time to research the stocks you're considering buying and understand the dynamics of the industry they belong to. That's just one risk factor. Another, and perhaps a greater risk, is your own money. It may be tempting to focus on a stock's TSR, but the reality is that you have to evaluate an investment on its own merit as well.

Even the most skilled investors sometimes get it wrong—total return is not perfect. Indeed, it's very easy to take for granted the one critical fact that everyone needs to understand: TSR is a one-year metric. It is generally used to measure performance for the entire calendar year. That is, you would expect an investor to sell a stock and buy it back in January if they expect to see a one-year increase in TSR.

For investors who buy or sell their stocks very frequently (so, at least once or twice a week), the number of shares they sold in December doesn't affect TSR. But, for those who are more active investors, their individual share counts might alter TSR.

By using the Five Factors, a great manager can help balance his or her investment portfolio. Total shareholder return factors in capital gains and dividends when measuring the total return generated by a stock. TSR is a good gauge of an investment's long-term value, but it is limited to past performance, requires an investment to generate cash flows, and can be sensitive to stock market volatility.