The Power of Compounding 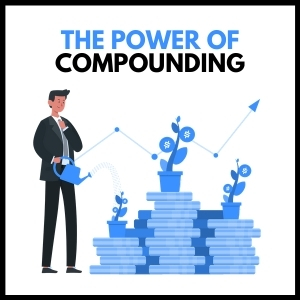 Albert Einstein said Power of compounding as the 8th wonder of the world. He who understands it, earns it. He who doesn't, pays it.”

In school days, I used to wonder what it was? It was just about investment and savings. How can it be the 8 th wonder? Many of us must be having similar questions. When you understand this power, you will know how effective it is. Many people have become successful because they understood this concept in earlier years of their life.

Warren Buffet, one of the greatest investors of all time has said compounding as one of the reasons for his becoming wealthy.

Lets understand the power of compounding with the help of a simple example.

Mr. John went for an interview in a company. The HR gave him two options for his monthly take home pay.

Take a minute to think the option that will give you the maximum pay.

Out of the $10.7 million, $ 5.4 million (more than half of the total amount) is earned in the 30 th month. The impact of compounding is less in earlier period and magnifies significantly in later period. Since it is slow in earlier period it is not easy for people to realize its impact. This is the main reason why people are not able to hold their good investment for long period of time.

Charlie Munger said, “ Understanding both the power of compound interest and the difficulty of getting it is the heart and soul of understanding a lot of things….The Big money is not in the buying or selling, but in the waiting.”

Here is another simple example. $100,000 invested in Microsoft shares in Jan 1990, have become $55.1 million in January 2021. This is at a compounded annual growth rate (CAGR) of 28.7%. Holding an investment for 30 years is much difficult than earning a return of 28.7% annually. This is why wealth creation is not so easy.

The power of compounding is driven by 2 factors.

- The rate of return

The difference in returns between Mutual fund and equity is just 2%. But this 2% leads to a huge difference in value of the investment at the end of 40 and 50 years.

The time period is the period for which the investment is made. It plays a huge role in the power of compounding. It is as important as the rate of return.

Let us understand with the help of another example.

When they retire (age 45) the value of their investment is significantly different. Though they invested the same amount at the same rate of return, the value is different because of difference in the investment period, which is 5 years. While value of investment for Mr. A is $3.8 million, it is just $1.5 million for Mr. B.

As an investor, you just need to start early and learn to be disciplined and be patient. The earlier you start investing the greater will be the wealth creation from power of compounding.

Enjoy learning and have fun.