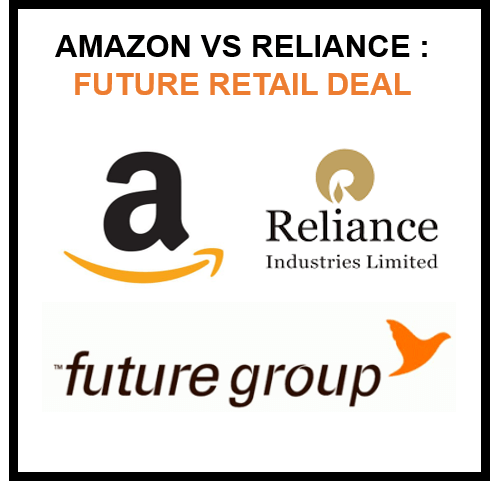 In an anticipated conclusion of the Amazon-Reliance-Future legal spat, The Supreme Court of India, on August 5 2021, has decided in favour of Amazon.com Inc.'s efforts to stop the sale of indebted, cash-strapped Future Retail Ltd. to Reliance Industries Ltd., giving the global retailing behemoth a major boost in its quest to dominate the $1 trillion retail sector.

The decision marks the conclusion of the local chapter in a heated battle between Jeff Bezos' Amazon and Mukesh Ambani's Reliance Industries, which wants to buy India's second-largest supermarket chain. The two behemoths, which are owned by two of the world's wealthiest individuals, are vying for a larger share of the world's sole billion-person plus consumer market that is still available to foreign companies.

Who are the business giants involved?

~Future Retail manages some of India's most well-known retail brands, instilling trust in customers through creative services, high-quality products, and low pricing that help them upgrade their quality of life on a day to day basis. Their flagship chain, Big Bazaar, is consistently voted among the most trusted retail brands in the country. EasyDay Club and Heritage Fresh, their small neighbourhood retail chains, operate closer to consumers' homes and provide a variety of services to members.

~RIL (Reliance Industries Limited) is an Indian multinational enterprise with headquarters in Mumbai. Energy, petrochemicals, gas, retail, telecommunications, mass media, and textiles are among RIL's diversified activities. The Mukesh Ambani-led company remains India's top exporter, accounting for 8% of the country's total merchandise exports at Rs 1,47,755 crore with access to 108 markets. Reliance is responsible for over 5% of the entire customs and excise duty revenue collected by the Indian government.

~Amazon.com, Inc. is a big online retailer with a market valuation of more than $368 billion US dollars as of 2020. The American multinational technology business founded by Jeff Bezos focuses on e-commerce, cloud computing, digital streaming, and AI. It began as a book-selling website, but has now grown to market gadgets, software, video games, fashion, furniture, cuisine, toys, and Jewellery.

What was the dispute about between the 3 corporate companies?

The Future Retail group's separate agreements with the two market giants initiated the dispute between Amazon and Reliance group.

The agreement with Reliance

~In August 2020, the Future Group agreed to sell its retail, wholesale, logistics, and storage businesses to Reliance Retail, a division of Reliance Industries, for about Rs 26,000 crore.

Future Retail is expected to sell its supermarket chain Big Bazaar as well as sibling retail chains like Brand Factory, Home Town, Central, eZone, and others to Reliance Retail as part of the agreement.

When India went into lockdown in March to combat the coronavirus outbreak, the shop reportedly ran into a significant liquidity shortage.

The agreement with Amazon

According to Amazon, a condition of the purchase was that Future Group not sell its assets to a list of companies that included Mukesh Ambani's Reliance Industries. According to this argument, the Reliance-Future agreement is void.

The competition is fundamentally for control of India's $1 trillion consumer retail market. Future Group is caught in the centre of a power struggle between two of the world's wealthiest individuals.

Reliance has already established itself as the country's largest brick-and-mortar retailer. Buying Future's retail, wholesale, shipping, and warehousing businesses would roughly double Amazon's footprint and offer it an unrivalled competitive advantage — something Amazon is unwilling to give up. Blocking Reliance is critical for Amazon if it wants to maintain control of the world's sole billion-plus consumer market that is still available to international companies. It has committed to invest $6.5 billion in India, demonstrating its commitment to the market.

What were the arguments put forward?

~Following the FRL's violation of contract, Amazon sent a legal notice to Future Group, and after receiving no answer, Amazon approached the Singapore International Arbitration Centre in October 2020. (SIAC). It is a non-profit organisation that provides an alternative dispute resolution method for cross-border transactions. It claims that Future Group broke the contract under which Amazon bought Future Coupons, a subsidiary of FRL.

~Future Group filed a complaint with the SIAC, an internationally recognised arbitration, stating that FRL should be kept out of this because the contract was signed between Future Coupons and Amazon. The SIAC, on the other hand, refused to exclude.

~On October 25, 2020, the SIAC issued an interim order in Amazon's favour. This made it illegal for FRL to sell its assets or issue securities in order to secure finance from a restricted party.

Amazon addressed a letter to Indian market regulator SEBI and CCI, together with the SIAC interim order and an emergency arbitrator award, in try to get it implemented.

~Future Retail filed a complaint with the Delhi High Court in November 2020, claiming that the SIAC's interim order was issued without jurisdiction because the notion of an emergency arbitrator is not covered under the Indian Arbitration Act. It also claimed that Amazon is not a signatory to the FRL shareholder agreement (SHA), and asked the court to stop Amazon from writing letters to SEBI and CCI.

~The Delhi high court's single judge bench, on the other hand, refused to give an interim injunction barring Amazon from writing to SEBI, CCI, and other authorities about the arbitral judgement blocking its asset sale. Future Group had also willfully disobeyed the emergency arbitrator's order, according to the ruling. Following that, a slew of cases were filed in both the Delhi High Court and the Supreme Court.

~Future Group's lawyers have contended since then that the company's survival is dependent on the sale to Reliance, and that a failed agreement will result in the loss of tens of thousands of jobs. According to reports, a multinational conglomerate is driving the Indian retailer to bankruptcy. "Economic hardship alone is not a legal foundation for neglecting legal commitments," the arbitrator said in October.

What was the final verdict passed by the Supreme Court in August 2021?

In the ongoing legal struggle, a two-judge panel of the High Court overruled a prior order to retain the status quo and prevent the merger from going through, paving the door for the Reliance-FRL deal on February 8. Following this, Amazon filed a petition with the Supreme Court, claiming that the Delhi High Court's previous judgement was unconstitutional and arbitrary.

The Supreme Court ruled in favour of e-commerce behemoth Amazon on Friday.

One of the primary issues in the case was whether a Singapore-based single-judge arbitration panel's order to prevent Future Retail Limited from proceeding with its agreement with Reliance Retail was legal and enforceable under Indian law.

The Emergency Arbitrator's decision to freeze the $3.4 billion deal is enforceable in India, according to Justice RF Nariman.

“Emergency arbitrator’s award holds good under Section 17(1) of the Arbitration and Conciliation Act and single judge’s order for such award cannot be appealed under Section 37(2),” he added.

The Act gives parties to arbitration procedures latitude to resolve disputes in accordance with institutional rules, including through emergency arbitrators issuing interim orders, according to the court.

How has this lawsuit, one of the biggest in Indian business history, affected the share market for the companies involved?

Since the outbreak of the epidemic, the Kishore Biyani-led organisation has been struggling to fulfil a $2.5 billion loan to lenders, and with the Reliance acquisition no longer being pursued, Future Group's financial troubles would intensify, and the company may be forced to liquidate.

The various lawsuits in this case have already affected the share market valuation prices of both Future Retail Group and Reliance Industries.

Following the Supreme Court's decision in Amazon's favour on Friday, August 6, RIL's shares dropped more than 2% to Rs 2,087 per share, while Future Retail's stock plummeted 10% to Rs 58.20 per share. Shares of Future Consumer, Future Lifestyle, Future Enterprises, Future Retail, and Future Supply Chain were down 10% at the close of the day's trading.

For Future Retail, the stock has fallen over 24 percent in the last five days. So far this year, it has corrected almost 40 percent, while the one-year return on the stock is also negative at over 56 percent.

~The retailer's shares had previously taken a significant tumble on March 19, 2021. The Kishore Biyani-led company's market capitalization dropped to Rs 3,028.66 crore. Future Retail shares started the day lower at Rs 55.85, down from Rs 62.05.

The Amazon-Future Group legal battle, which is taking place in numerous courts across India and even in Singapore, might define the future of Indian retail and ecommerce. With the SC passing its verdict, it becomes clear that an interim award by an arbitration tribunal is indeed enforceable in India.

The question is whether India is willing to let non-compliance with business norms detract from its image in the global economy as it seeks to attract foreign investment.